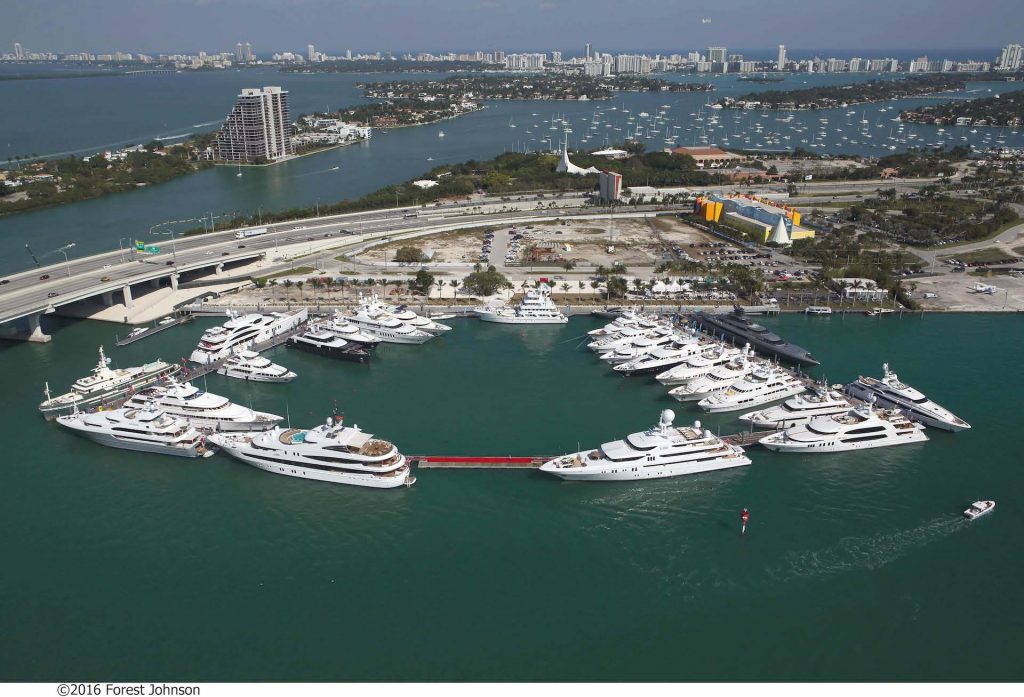 How is Yachts Miami Beach different from Fort Lauderdale, Monaco, Cannes or any other show?

Kent: It is quite different in that the volume of superyachts is substantially less, and the show is smaller. Although it’s the second largest show in the US it’s about, probably, a third the size of the Fort Lauderdale show. However, last year they started an expansion and this year they’ve continued it. The brokerage show and everything used to happen on Collins Avenue and then new boats were over in Miami Downtown area, not even in Miami Beach. This year they have separated the large yachts in a different section. Consequently, there are going to be more there this year than there ever have been in the past. They changed the name of the whole show to Yachts Miami Beach. The two sections of the show include Island Gardens, which is where the big boats are out on Watson Island. That’s a completely separate area from the show’s main area – Collins Avenue, which is historically where all the boats used to be.

What should guests look out for at this show?

Kent: I don’t look at boats as how nice they are because there are a lot of beautiful nice yachts for sale. I look for a nice yacht that’s good value. I would say besides my boats, the ones that I would be touting and encouraging during the show are a 190 foot Trinity called SKYFALL. It was built in 2010 and is offered for sale at USD 33,500,000. It’s been for sale since 2015 but the price has come down. I would describe it as well priced.

Apart from the price, what are its attracting features?

Kent: It’s got a great gym in it so it would appeal, perhaps, to a slightly younger set. When I say traditional, it’s not a high gloss traditional, it’s sort of a satin finish throughout, with lots of big open spaces for entertaining. Somebody who enjoys entertaining will like it. It’s got seven staterooms. It has an unusually large number of staterooms for its size which kind of makes it a little more attractive for somebody who’s going to have lots of friends and family, and/or for charter. You can take your nanny, or your bodyguard, or whoever you might have as additional. It’s got a regulation height basketball net on the top deck. It’s kind of youthful oriented, let’s say. There’s actually a secondary gym, or workout area, that’s got a heavy bag and other weight equipment. For anybody who’s fitness minded, I think it would be a great yacht. Also, it has an unbelievable wine store – there are probably 300 bottles of wine, maybe more than that. For the wine connoisseur, it would be ideal. Also, the whole boat is wheelchair capable. It’s also got a helicopter deck, so it’s helicopter capable. They’re not carrying one now, but it is chopper capable. It’s got a transatlantic range, so she can get around anywhere easily.

All right, let’s move on to your next selection.

Kent: The next one is a 151 foot Delta called KATYA. She’s a 2009 and she too has been on the market for a while, which is actually, in my mind, never a bad thing. She started at an asking price of 28 million and is now asking 19.950 so you have a serious seller now on a beautiful boat. It’s almost a 32 beam on 151-foot length. This is a big ass volume boat for its size range. To be specific, she’s 472 tonnes. All Deltas are custom built and widely regarded as the highest quality builder in the US. Again this is a good boat to visit the Caribbean on a charter? Go to the islands, do some snorkelling, or fishing – for the sports minded. She does have zero-speed stabilization.

It looks like she’s got a classic sort of American interior?

Kent: I think it’s cherry teak. The fit and finish on this boat are both exceptional. It’s northern European quality. It has an awesome galley.

It was a finalist in the World Superyacht Awards in 2010.

Kent: As far as nuts and bolts, this is a really high-quality boat. The quality for this size range is in the second to none category and the engineering is exceptional.

Okay, and what’s the price?

The next yacht is a 137 foot Royal Denship called UNFORGETTABLE. She is a 200, priced at USD 4,900,000, which is an exceptional value on this boat. I think it has a lovely sort of classic, almost Scandinavian low-key clean design. It’s not elaborate nor ornate, it’s just beautifully done, very tasteful, classy, muted sort of tones. It shows very well. They recently renovated the salon and dining salon which used to be separated and now they’ve combined so it has a much more practical function to it. People don’t really like to go into an enclosed dining salon, nor do they like the main salon being cut off by the dining salon. Those are two negatives that have now become positive. There’s a nice sun pad on the foredeck which is a nice place to hang out. A lot of boats don’t offer that feature, but this one was ahead of its time. The galley is a first class commercial galley, a real proper chef’s galley. Again, it’s probably the best value for the dollar in the world in this category. Anything else that comes close to this number is not going to be this quality or condition. Royal Denship also made the 78 meter Pegasus VIII in 2003. She was called Princess Mariana then and Pegasus VIII is her new name. This is the lineage from which UNFORGETTABLE comes from.

All right, let’s move on to the boats you’ve got at the show.

Kent: Well, I’ve got the 95 foot Johnson 2011 called GO. We reduced the price to USD 3,750,000. She has an on deck master plus two king bed staterooms below. All staterooms are king bedded, which is unusual. It’s oriented to adults, basically – a nice niche to fill. It’s also great if it’s two couples that are buying it together, which happens to be the case with this particular owner. It’s in excellent condition, it’s got an all new interior in it, all soft goods have been either updated or replaced. In this price range to have an on-deck Master suite is unusual and a bonus. It’s a great charter layout with a Jacuzzi up in the fly bridge and lots of open spaces everywhere. She is zero-speed stabilized. 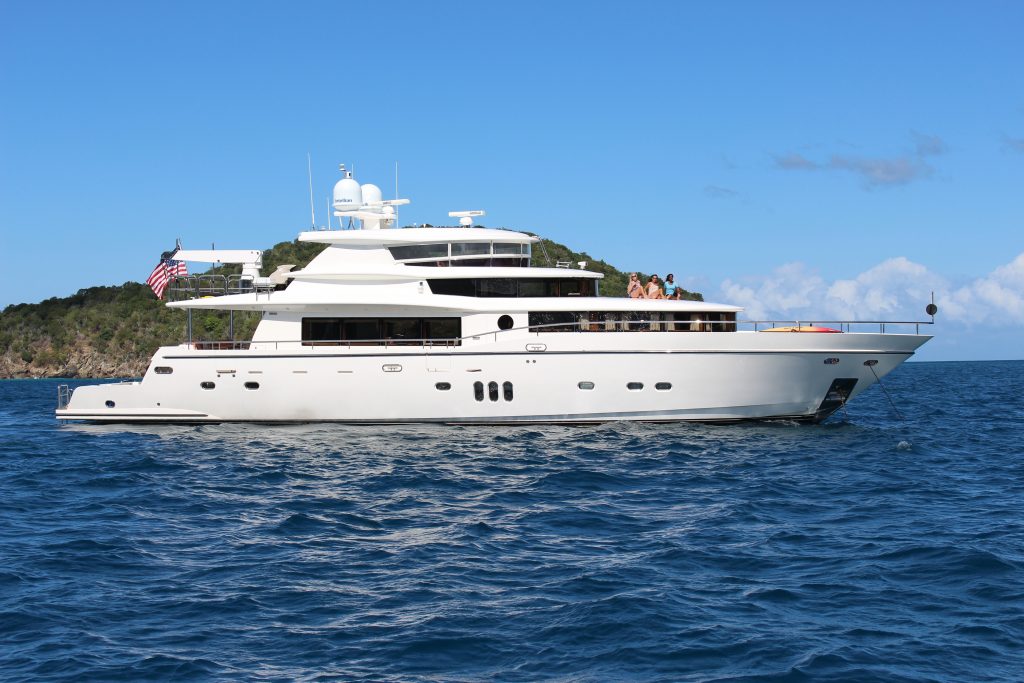 So if it gets a bit choppy, that allows people to cruise comfortably?

Kent: Right, yes. She is also priced properly at that asking price, which is a recent reduction. She has a lovely interior, very classic; a newer style but still keeping with the yacht feeling. She’s got a nice bar up on the fly bridge, great fly bridge dining. Aft deck dining. There are a lot of spaces that are good for entertaining. Then I’ll have SKYE which is the 80 foot 2015 Azimut. She also has zero speed stabilization, she has four staterooms, great layout, a nice foredeck seating area, which is in addition to the normal fly bridge and aft deck seating areas that are outside. She has a very contemporary interior, a bit of black, white, and wood is the feeling. 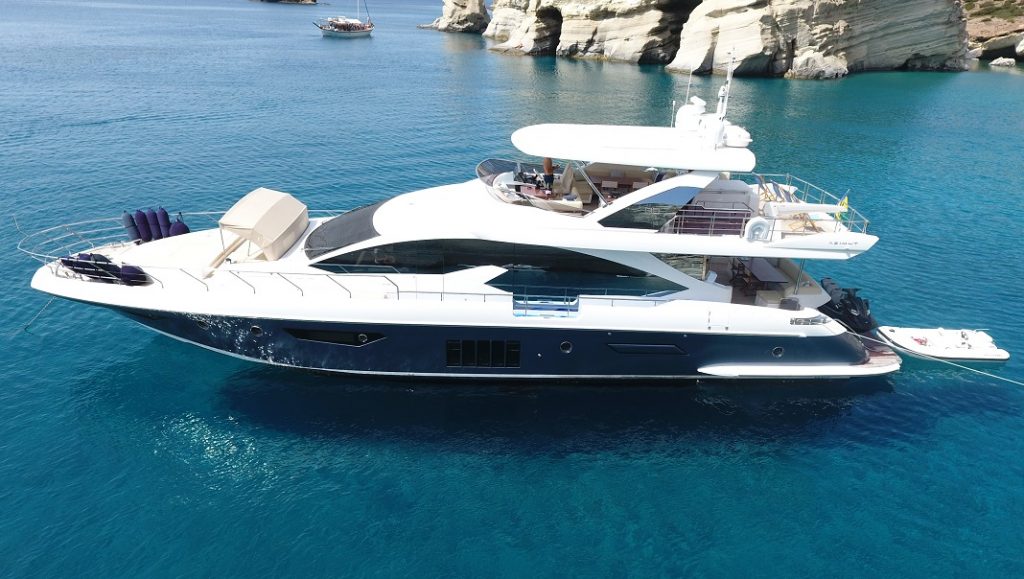 Is it the sort of boat on which to arrive in style in the Bahamas? Or is it to take the family out? Or a bit of everything really?

Kent: It’s a bit of everything really. This is my favorite ever, I think. I’d say it’s oriented towards the younger crowd. It’s got a great garage for lots of water toys. One feature it has that separates it from the other 80 Azimuts, is that it is fully dual continent powered. You can use it in the US or the Med and it has both 110 and 220 capability with an atlas converter. But unlike any boat that has that, this literally has, right down to the plugs, which have both outlets for the US and for Europe. It cost USD 175,000 to do this, which very few people bother to do in this size range. The reason that they don’t do it even in bigger boats is because the bigger the boat the more expensive it is. In a large yacht like something in the 40, 50-meter range, you’re going to be looking at a half a million dollars to do this, so nobody does it. It’s just prohibitively expensive, but this guy did. That guy is my business partner. He went a little over the top because he wanted to have that. You can truly use whatever you’ve got wherever you are. That’s still very unusual and no one does that. And maybe one of the other great things about all these boats is not just that they’re great boats, but they’re very well-priced great boats. This one is also about to have a half a million dollar price reduction just before the show. That’s meaningful.

That’s great. What else is there to do after we’ve had our fill of the boats? Are there any parties going on?

Kent: Here’s what I would say about that: you’re in one of the hippest, chicest towns in the world. It’s got some of the finest restaurants in the world. If I were visiting from out of town I would be hitting some of these awesome restaurants. Right there at the Fontainebleau, which is directly across the street from the show is a fantastic Italian Restaurant called Scarpetta’s. There is a wonderful steakhouse called Strip Steak. It’s a Michael Mina Restaurant, he’s a top world renowned celebrity chef. There’s a Hakkasan for fantastic Cantonese Asian Fusion.

Where’s a good spot for yachties to go for a drink? Or are they mainly in the show?

Arriving at the show, should one come early and park up? Or should one get a taxi in?

Kent: There’s a VIP arrangement at the show this year that I would encourage any client to use. It includes parking, access to the VIP rest stop in the middle of the show. It’s really a big boat called the Grand Floridian, but you can go there and chill and have something cool to drink or eat, have lunch or whatever. That’s the VIP Experience and it includes Valet service. It’s well worth the money it costs. It takes all the hassle out of the show.

Kent: That’s a good question. The Accuweather forecast is predicting an average temperature in the upper 70s for that week and mostly sunny. Rain is not anticipated, so come on down!

To buy tickets to the show, click here. To find out more information about the attending yachts, please contact Chamberlain Yachts.